Trail cameras are neat gadgets. They can be mounted in areas of interest to survey/investigate what happens when you’re not around. Their infrared flashes allow them to take pictures in the day or night. Hunters use them to scout their prey, including location, age distribution, and buck to doe ratios. Property owners use them to catch trespassers and vandals. Backyard birdwatchers use them to capture images of the birds visiting their feeder trays while they’re asleep or not even at home. These field cameras are also an indispensable tool for ecologists, wildlife biologists, and habitat managers. Plus, the “surprises” they sometimes pick up can be more interesting than what you intended to use them for!

How Does a Trail Camera Work?

Trail cameras have a motion sensor, a passive infrared sensor. This type of sensor works just like security lights that automatically switch on if someone or an animal walks by. When a person or animals walks within the sensitive range of your trail camera, the sensor will automatically trigger that a picture and or video be taken, with the exact type often dependent on how you set up the camera. The infrared sensor is invisible to animals so it does not scare them off or interfere with their normal behavior.

How Does a Wireless Trail Camera Work?

1. A “WiFi wireless camera” which connects through a WiFi network

This is a very narrow usage of the term, “wireless trail camera.” Nonetheless, a few sellers seem to limit their usage of the term to a WiFi camera. The WiFi wireless camera is essentially a combination of a camera with special features and an antenna. They are housed in a weatherproof case and have the ability to connect with a WiFi network. Pictures and videos can be sent directly to your cell phone or email via the WiFi network.

However, this type of wireless trail camera is limited in scope. In order for these to work, the camera has to be within range of a reliable WiFi network, which is usually not the case considering where the cameras are usually located. However, WiFi wireless cameras can be quite useful in a backyard or on a small property. This is especially true for security, close to a house or building with a WiFi network.

2. A “Cellular Trail Camera” which connects through a GSM network

To use the traditional cameras, you have to go to the camera in the field, remove the SD card, download the images, and then go back and replace the SD card. If your camera(s) are placed in a remote location far from your home or work, this becomes a serious hassle. With wireless trail cameras, you can be miles away and still keep up with what’s going on at your site. Some wireless cameras even give you a dual option. You can have your images sent to you via cell phone or email AND download to the SD card.

Another major advantage of a wireless trail camera over a traditional trail camera is you do not have to contaminate your site. Retrieving the SD card can spread your human scent around the area! Many animals will be spooked away when you do so. Note that, if you are in the field, most wireless trail cameras come with LCD screens. These allow you to easily scroll through menus for easier set-up. You can customize your settings and preferences using this screen. As well, you can preview pictures if you are using an SD card for back up of images and video.

Almost all wireless trail cameras with cellular service connect via the GSM (Global System for Mobile) network. If your camera(s) will be placed in the United States, you will need cell service through either AT&T or T-Mobile to connect to the GSM network. You can either add a line to your existing cellular service if it is the same as your camera uses or you can purchase a pre-paid cellular phone service. If you do the latter, make sure you receive an activated SIM card with your purchase. Going to an authorized AT&T or T-Mobile store is your safest bet for this.

As a special note, AT&T Go Phones sold at WalMart have locked SIM cards so they will not work with your wireless trail camera. Although wireless trail cameras originally used the 2G network, most of the new models have upgraded to the much faster and more reliable 3G network. This is definitely something you need to be aware of if you are shopping for bargains. They might include older models from inventory that were never sold and still use 2G technology.

Battery life is listed here first because it is an often overlooked feature, or one that is undervalued when shopping. However, long battery life is quintessential for a trail camera since it would defeat the best feature of such a camera if you have to go back and change the batteries all the time! While the manufacturer’s reported battery life is important, it is better to look through reviews to get a more realistic idea of how long the battery pack will actually last. Keep in mind that the number the manufacturer reports is often based on very low usage. Also, you might need to buy batteries separately, depending on the model.

This is another extremely important factor that many people overlook when selecting their first trail camera. Some cameras can be highly customized while others have little to no customization. For example, some cameras will only allow you to take a video of a certain length whereas others will allow you to set the length of the videos taken by the precise number of seconds you want. Still others will only give you two or three options. Multi-photo options are another good customization feature to look for. You may only want one photo of an animal that comes into range whereas others may want a cluster of photos taken. Some cameras will allow you to set the trigger to only a certain number of hours after nightfall and before sunrise.

The faster the trigger speed the better. With a slow trigger speed, you will miss some of the pictures of animals in motion close to your camera. Within less than ten to twenty feet, by the time a camera with a slower trigger speed takes the picture, the animal may be out of view.

Trigger distance is how far out an animal can be and still trigger a picture or video. The manufacturer’s stated trigger distance may and will often be exaggerated. This is considering images really far out may be so blurred that they are useless. Most cameras, even the cheaper ones, will pick up out to sixty to eighty feet with decent pictures in the daytime. The better ones will pick up fairly good quality shots out to one-hundred to one-hundred twenty feet.

In general, the more megapixels, the crisper the photographs will be. 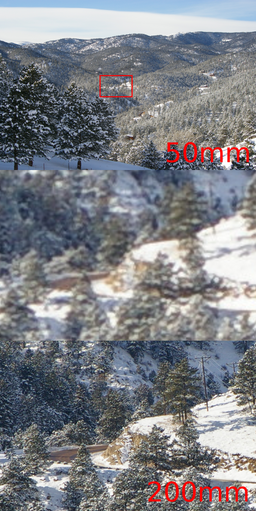 This is especially true if you like to zoom in on pictures to see more detail. For this, you will need at least 6 megapixels and higher. In the traditional cameras, people usually set pictures at lower megapixels to save room on the SD card. However, with a wireless trail camera, this is not as much of an issue. You can opt for high megapixels and get higher quality pictures and videos! Most cameras will allow you to select between a low, medium, and high megapixel shot. The maximum megapixels possible is the number you want to pay most attention to when shopping.

Please note, however, some trail camera devices use software (see interpolation’s definition, or Nikon’s explanation) to artificially increase image size. This is without increasing image quality, so check the reviews before buying that 14MP camera!

Some trail cameras tend to give blurry pictures whenever an animal is moving or is too close to the camera. To determine which cameras have the best picture clarity, be sure to look at our personal rating system we used for these models. Again, adding more pixels does not always mean higher picture quality. The mountain image here displays differences in image quality similar to those experienced when cameras digitally “add” megapixels compared to when the camera natively takes higher-quality photos.

You won’t be able to discern much detail in night photos if the infrared flash didn’t get that far. Getting a usable picture past sixty feet when it’s dark is considered very good for trail cameras.

Unfortunately, trail cameras are a favorite among thieves. Therefore, you will want to pay close attention to the security features of any trail camera you are considering. Yours may provide an excellent way to place a lock on the box while others do not. Some manufacturers offer a security case for an additional fee. You can always purchase one from a third party, but these approaches cost a lot of extra money. A portion of cameras may be designed so that to remove the lock, a thief would have to actually break the camera. Of course they do not want to do this, unless they are just vandals.

There is wide variety in how cameras attach to posts or trees. Some are obviously flimsy with cords and other attachments that can easily break and/or get lost. Others are obviously sturdy and well-designed.

Trail cameras can sometimes be equipped with additional lenses. These can be for capturing images closer to the camera or for a wider field of view. The first would be great if you’re setting up your camera to monitor a specific spot such as a salt lick or a bird feeder. The latter might be good for doing large plot surveys.

Mentioned earlier, if you want to have your trail cam sending photos to your phone or E-mail, then a wireless version is the way to go! Know that you’ll need to have cell service on the network to which the camera will belong. Also, you will likely need to purchase your a data plan for the camera, though some cameras come with a trial data plan. If you can’t find good reception for your wireless network in your camera location, then you might want to consider the standard trail cams instead.

When selecting a wireless trail camera, be sure to do a cost benefit analysis. You may find that for only $10 to $30 dollars more, you get many more features and a much better camera. Also, be sure to check out the reviews carefully because you cannot always trust the manufacturer’s specs. Good luck in shopping for your camera!