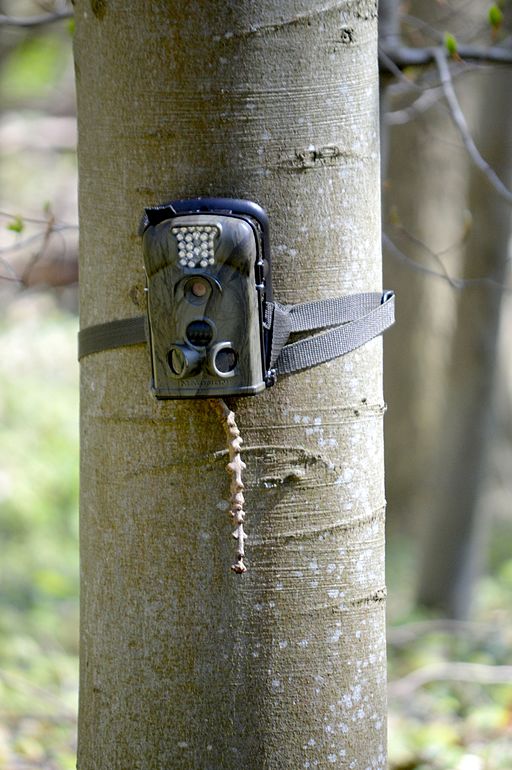 Why do you need a trail camera? Trail camera uses vary, but their overall goal is constant. A trail camera is a secret camera that is designed to capture footage of wildlife during the day and at night. They are housed in compact weather-tight casings and can be strapped to trees or posts. Infrared and motion detection equipment are present in these devices. When an animal walks around the area of the camera, the motion detection triggers the camera. Footage of anything happening in front of it is taken.

Typically, a trail camera can give a series of still images or a short video clip. The camera uses the ambient light from the sun during the day to take still photographs and videos in full color.  During the night the infra-red sensor/emitter illuminates the animal giving a black and white video clip or photograph. The infrared is completely invisible and the animal never knows it is being watched.

The Primary Use for a Trail Camera

When a trail camera uses an SD card, thousands of images and hundreds of video clips can be captured. This can happen over a period of weeks, even months, without the need of human interference. The battery typically has a  life span of up to 30 days under average use. Replacing the battery and retrieving images from the SD card are the only time you need to get to the trail camera itself. These trail cameras have been used in many cases such as when the BBC used them to capture footage of rare species of wildlife such as tigers, foxes and snow leopards in the mountain areas of Bhutan.

Other Trail Camera Uses Include:

1 – Locating an animal in its hiding place

Some animals visit certain places for only a few hours or days in a year and they are often on the move. Trying to locate these animals, nature-watchers and hunters are constantly pushed to the edge. Using a trail camera enables you see the animal in its hiding place and even determine the time the animal visits the area. Since the camera is not detected it is easier to watch the animal’s activities. The moment will be stealthily captured by the camera. These photos will give details that may take a long time to be captured again, as the animal is constantly moving.

Color distinction is the only simple way to spot different species of animals in the wild. Most nature lovers or even those studying animals need to distinguish animals from each other. A trail camera is the best for this work. Since they are strapped to trees or posts the animal can come close enough to the camera and not realize it is being watched. This makes it easier to have a clear image of the animal or even a video clip which will enable you to distinguish the animal easily. Having a video clip gives even more details about the animal’s behavior in its natural habitat.

Wildlife lovers and even those studying animals do not only want to see an animal. They also want to see how it lives and behaves while in its habitat. A trail camera comes in handy for such work since the only thing you need to do is place the camera properly. It’s easy to see everything an animal does when a trail camera is well-placed. Special moments are easily captured, such as feeding of the young ones, hunting for prey, giving birth to young ones and even just watching the animals relax such as a pride of lions. A trail camera can give a whole story about an animal in the wild. Since the trail cameras can be placed in different locations, this can be easily done. Distinguishing between look-alike animals can be a daunting task, especially for newer wildlife

Trail cameras may be used to easily monitor wildlife. They are easy to position in hidden places where the animals cannot detect them. Nocturnal animals and predators are very hard to find, but with the use of trail cameras this becomes easier. The cameras are able to help keep track of animal species and even provide you with movement patterns of different animal species. A trail camera gives detailed information for animal species that are hard to find. The images and video clips are better since the animal being watched is not aware of it. You might take pictures like those in this article. One may even catch interesting interactions like in the following video.

There are so many species of birds on the world. A trail camera is well suited to monitor birds the same way it does mammals. To monitor birds one has to choose the best locations such as a prominent perch or a carcass; this can generate fascinating pictures of birds and scavengers alike. Trail camera uses also include monitoring bird migration, and they’re also important when it comes to ranging of birds. Below is an example of a trail camera used to monitor a blue bird house.

Trail cameras photos provide plenty of data such as the size, number, and types of animals in an area. Information collected by the trail camera help create a better hunting experience since they collect data during all seasons and time. The data correlates with the animal activities. In turn, the hunters are able to learn about what conditions, times, and places an animal shows up. The information from the trail camera gives a clear picture of when to anticipate hunting. Of course that means a hunter will have a better chance of success.

For the best results, regardless of your trail camera use, it is important to choose the best location for said camera. For example:

For those interested, we have reviews on Bushnell cameras, Moultrie cameras, and Browning cameras for additional information.